How to Bisect a Bivalve 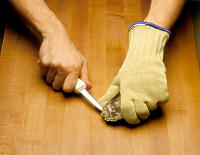 1. Make sure the shell of the oyster is tightly closed, or closes quickly when handled. Any that do not should be discarded, since they are dead and unedible. 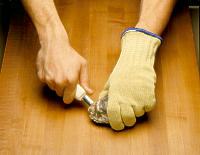 2. After cleaning by scrubbing the shell with a stiff brush under cold, running water, the oyster is ready to be opened. Grip as shown, and force shucking knife inside opposite the hinge. 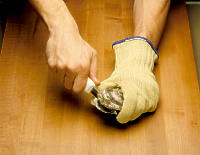 3. With a twist of the knife blade, slowly force the oyster shell open. 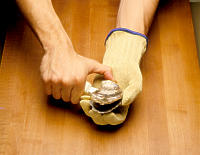 4. In a quick side-to-side motion, slice through the large abductor muscle attached to the flat upper shell (note thumb position). Remove the shell. 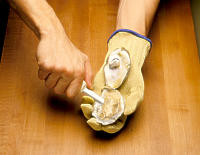 5. Cut the lower end of the same muscle, which is attached to the deep half of the shell. Remove any chips of shell that cling to the meat. 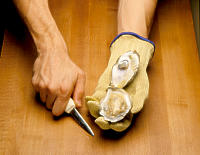 6. The most common way to serve is on the half shell with lemon. If not served immediately, place oysters in a container, cover with their own liquid, and refrigerate. 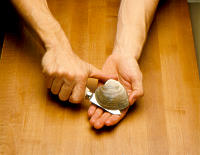 1. Like oysters, the shell should be tightly closed if the clam is edible. Hold the clam as shown and insert knife between halves of the shell. 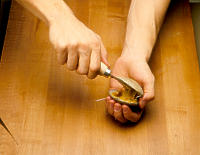 2. Cut around the clam, using a twisting motion to loosen the shell and open it.